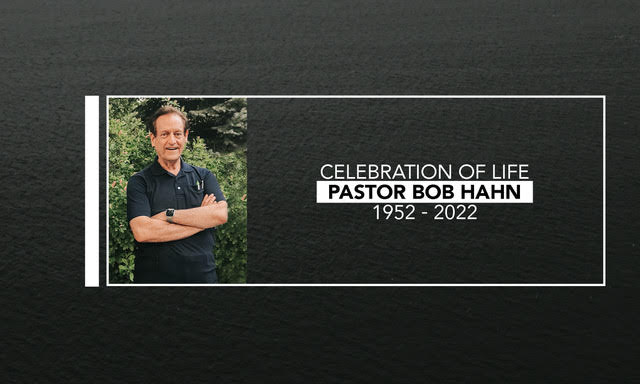 Pastor Robert (Bob) Hahn was born in Madison, Wisconsin on September 13, 1952 to John and Bertha (Dietrich) Hahn. From the age of 2, Bob grew up in the Chicago suburbs of Elmhurst, Illinois, mostly preferring to watch TV and listen to music over playing sports (which was more of his brother Tom’s obsession). This stayed with him throughout his life as he enjoyed the nostalgic “simpler time” of TV, movies, cars, music, and comedy from the 50s, 60s, and 70s. Though he was a natural sprinter in track while attending York High School, he fell in love with singing in choir which continued into his college years after graduating in 1970. In college, his passion continued while he developed his vocal gift and double majored in Marketing and Business at Western Illinois University. He graduated with a Bachelor’s Degree in Business in 1974.

After college, he started his full-time vocational ministry at Eden Prairie Assembly of God in Eden Prairie, Minnesota (1979–81) and was then led to First Assembly of God in Joliet (1981–2012), serving both churches as the beloved Children’s Pastor and impacting countless children who came through his “Junior Church” with his trailblazing approach to ministry to make the Bible fun through his own characters, magic tricks, illustrations, puppets, music and more. That time not only touched the lives of children, but also their parents. This deeply rooted and engaging biblical teaching has transcended generations as his ministry was passed along to descendant after descendant.

Pastor Bob went above and beyond throughout the years as a regular speaker at Trinity Christian School Chapel, Kids Crusades, Kids Camps, Royal Ranger gatherings, leading senior adult ministries, and many more. In 2012, he became the Senior Pastor at Peace Chapel First Assembly of God in Morris, Illinois where he continued to love and minister to everyone he met until his passing on January 15th, 2022.

Throughout his life, you could find Pastor Bob on the local golf course. He always carried his clubs (occasionally even playing a quick round with just a 7 iron), was always on the lookout for stray golf balls, and would regularly give out his own “awards” to the players in his group. He always made things more fun (and funny). With both his family, friends, and colleagues (including The Parsons Four Quartet) he would frequently let movie lines and comedic “one-liners” just come out before he even knew it was happening.

He is survived by his loving wife of 45 years, Janine (Schoob) Hahn, his two sons, Philip (Chanda) Hahn and Steven (Rhoda) Hahn, and his five grandchildren, Aiden, Ashley, Simon, Grayson, and Micah.

Preceding him in death were his parents, his brother, Thomas Hahn, and two sisters, Susan Hahn and Kathryn Waddell.

Visitation will be Thursday, January 20, 2022 at the Fred C. Dames Funeral Home, 3200 Black Rd. (at Essington Rd.), Joliet from 3:00–7:00 p.m.  Pastor Bob will lie in state Friday, January 21, 2022 at First Assembly of God Church, 1741 Essington Rd., Joliet from 9:30am until the time of funeral services starting at 10:30am.  Interment will follow at Woodlawn Memorial Park. For more information, please call Fred C. Dames Funeral Home at (815) 741-5500. Please continue to share a favorite memory and your condolences at The Caring Bridge memorial page.